One of the vegetables I hated as a child and started enjoying very much later is okra. As a kid I hated it because it felt slimy and reminded me of tadpoles and mucous, and I used to gobble it down with a glass of water only because of my mother’s wrath.

Once while in hostel my friends and I had this extremely crisp bhindi, and my view changed completely after that. The crisp bhindis tasted amazing but then they were fried in lot of oil. This is the kind of bhindi I love – It is simple, does not require much oil and looks as good as it tastes.

This is a beginner’s recipe, so if you taking your baby steps towards cooking, this one is just the right thing for you. Sometimes when the okra/bhindi/lady fingers is really tender, I like to slit it into four lengthwise, and then chop them 1 inch long, and sometimes when I am in a hurry, I just chop into really thin discs.

To get a cup of cooked veggies, you require at least three cups of raw chopped okra, as they tend to shrink while cooking.

Okra should be cleaned well before chopping and dried completely with a cloth. I generally wash it in the night and spread out in a large colander for the next morning. Sometimes I cut it and leave it open in the refrigerator for a night before making. This, I feel reduces the sliminess.

Method:
Heat oil. Splutter jeera and ajwain.
Add onions and fry till transparent.
Add the chopped / sliced okra, and toss for 2 minutes, add amchoor and toss well. Cover and cook for a minute.
Uncover and add all the powders, and salt except coriander. Mix well till the sliminess disappears. The bhindi should still retain the green colour.
If you like masala, add the coriander powder just before removing.

Fry one small finely chopped onion in the oil and then proceed as above. Keep frying uncovered till the bhindi turns a shade dark and crisp, like the one below. I sometimes do this, as my daughter loves this. 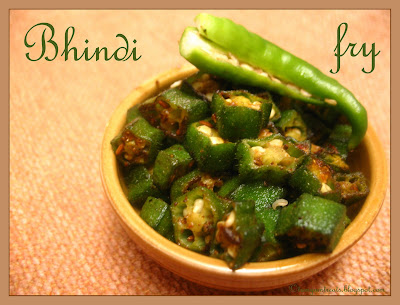 This stir fry is an often cooked dish at most Indian houses, and tastes equally great with rice and Dal / Rasam / Sambar / Morkootan / Kadhi, as with rotis.